#ProtestPP Saturday like any other for Claremont Sidewalk Witnesses

In contrast to those who gathered for the first time outside of Planned Parenthood clinics across the nation for the #ProtestPP protests, long time pro-life advocates in Claremont, New Hampshire for the most part treated today as any other day to stand witness.

Long before the videos from the Center for Medical Progress

were released, these gentle, but stalwart pro-life advocates have been here praying for an end to abortion. These everyday folks from local churches regularly sacrifice time with loved ones to stand vigil in rain, wind, and snow outside of area clinics just to offer women other options, resources, and prayers. Many are the same folks that prayed for years outside the West Lebanon Planned Parenthood abortion facility that closed not so long ago. They are the last line of defense for women who are about to make a choice that may haunt them for the rest of their lives. 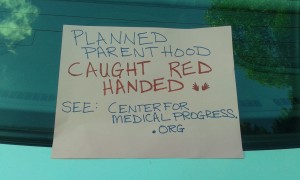 The main demonstration took place a little later than the national protest and was smaller than others in the state, but the effect was no less powerful. Planned Parenthood of Claremont, on busy downtown Pleasant Street, shares a parking lot with a pizza shop, so the group assembled across the street at lunchtime. While it was reported that at least 4 advocates took shifts praying during the national protest hours, 13 other witnesses assembled to pray aloud from noon to one. They stood in a line praying peacefully and using a few simple signs to raise awareness to the atrocities the abortion industry performs daily. Passersby looked at the sign citing “CenterforMedicalProgress.org” with interest. Another sign read “No tax $$ for Planned Parenthood.” Many in the steady traffic honked or waved their support.

In a neighborhood where the median household income is under $20,000,  Planned Parenthood’s spectre overshadows the town, leaving heartache and broken families in its wake. Given the fact that the scandal-plagued organization was founded to keep the poor from propagating, the abortion giant’s presence here is hardly surprising. With the release of the videos, the nation is finally waking up to the fact that if we were not so busy funding Planned Parenthood with our tax money, we could be funding real healthcare and alternatives to abortion.

Planned Parenthood of Claremont does not provide surgical abortion services, and so was unlikely to draw the crowds that other locations did today, but they do give abortion referrals and distribute “emergency contraception” (abortifacients like RU-486 and “morning after” pills). In the minds of those attending to witness today, there is only one difference between the horrors of surgical abortion and the heinousness of sending a woman home with pills to abort her child alone in her bathroom. In the first case the babies are being dissected – sometimes alive – and sold for profit, whereas in the second case they are getting flushed down the toilet. Both are irrevocable tragedies for which words fail.

Many sidewalk prayer witnesses struggle to see why selling babies’ body parts is somehow more provocative to the general public than babies being killed. They are, however, relieved that the Center for Medical Progress’ graphic depiction of what goes on behind closed doors is finally shining a light on the lies that Planned Parenthood has forever perpetuated about fetal humans being a “clump of cells” and their claims about offering “compassionate care” to their victims. The videos and the outrage they have generated are an answer to many fervent prayers.