Lately, I have seriously pondered what the great Martin Luther King Jr. would have said or thought about “buffer zone laws.”

The New Hampshire House and Senate have passed such legislation, and Governor Maggie Hassan may sign it in to law.

I truly hungered for how Dr. King would have responded to such arrogance, desperation, and strong arming by our lawmakers as they rushed to create unjust restrictions and oppress my Constitutional rights to (speak and assemble) be on a public sidewalk, and to speak freely to those who will listen about alternative choices to health care decisions.

The law has trampled, restricted, denigrated and mocked my Constitutional rights all in one fell swoop. Senate Bill 319 makes New Hampshire the 17th state to literally block access of a public sidewalk to the public at facilities that offer abortions. 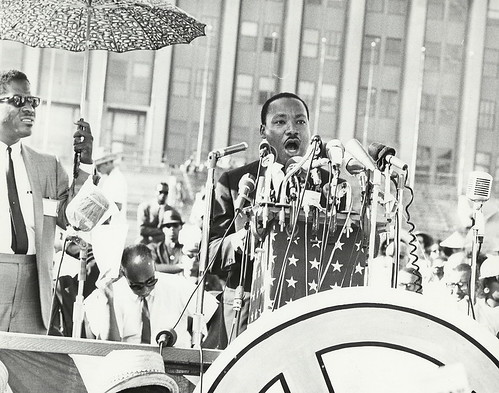 From 1955 until his death in 1968, Dr. Martin Luther King Jr. was the dominant leader of the US civil rights movement. The Rev. Dr. King believed that nonviolent protest was the most effective weapon against a racist and unjust society.

I have often wondered what would have happened had they put up a buffer zone in Birmingham, or Albany, or at the March on Washington for jobs and freedom. I was quickly hearkened back and shown that the buffer zones in King’s time did exist, consisting of arrests and detainment of Dr. King over long periods of time, hoping to squash the efforts of those who joined him.

I was reminded in reading Dr. King’s 1963 letter from a Birmingham jail, that King encountered many segregation policies and unjust laws in his quest for the truth. He answered some of his many critics. He reminded them, “In any nonviolent campaign there are four basic steps: collection of the facts to determine whether injustices exist; negotiation; self purification; and direct action. We have gone through all these steps in Birmingham.” Dr. King pointed to history to remind us what happens when laws are twisted to protect only some of the people most of the time, and to further explain his stance in Birmingham, saying: “Never forget that everything Hitler did in Germany was legal.” And “We have waited for more than 340 years for our constitutional and God given rights.”

It was, after all, a Supreme Court ruling, which made it the “law of the land” that our Afro-American brothers and sisters were non-persons, and therefore, not entitled to the freedoms which emancipated the rest of society; specifically, Life, Liberty and the Pursuit of Happiness. They were reduced to “property”.

Since 1973, when the US Supreme Court first declared ​preborn​ babies were non-persons and therefore not afforded Constitutional protection, individuals like myself have led nonviolent protests, marches and vigils trying raise the conscience of a society who has bought into the lie that women can better control their bodies only by killing their preborn babies. We are on the public sidewalks outside the abortion clinics. We reach out to women who believe abortion is their only answer, offer them other real choices.

These clinics are defined simply as doctor’s offices in New Hampshire. They need no special license, no special designation, no emergency personnel, not even an on-the-premise New Hampshire doctor, who has privilege to practice at a local hospital should there be complications. By their own fruits and the numerous testimonies offered by their victims, we affirm that the pro-choice “keeping abortion safe and legal” slogan is a blatant lie.

By their own fruits and the numerous testimonies offered by their victims, we affirm that the pro-choice “keeping abortion safe and legal” slogan is a blatant lie.

We have convinced a number of mothers to choose to keep their babies. We have offered them real help. That, of course, takes business away from the clinic.

What other business gets to have a 25-foot protective bubble around their building, and going on to the public sidewalk? A bubble that prevents taxpaying, law-abiding citizens from walking and talking and praying?

Even polling places, where people go to vote don’t have such a restrictive policy.

King experienced firsthand similar tactics, and said, “Law and order exist for the purpose of establishing justice and when they fail in this purpose they become the dangerously structured dams that block the flow of social progress.” He cited St. Augustine, saying that “an unjust law is no law at all!”

God forbid there should be real choices afforded to women in their healthcare. It seems to me that the only choice they want to protect is the one that kills the babies.

Dr. King tells us that “our lives begin to end the day we become silent about things that matter.” The buffer zone will not silence me or anyone else. Like the jail sentences experienced by King, it puts a little kink in our efforts, but it is not just and must be challenged.

Dr. King goes on to remind me that “Property is intended to serve life, and no matter how much we surround it with rights and respect, it has no personal being. It is part of the earth man walks on. It is not man.”

The public sidewalk is public! I have a right to walk on it and talk on it and pray while I am walking there. I know we are not welcomed there, but that is not the issue at hand. King eloquently points out to all:

“We who in engage in nonviolent direct action are not the creators of tension. We merely bring to the surface the hidden tension that is already alive.”

Thank you Dr. Martin Luther King, Jr. You helped me understand that we must always continue to pursue justice in the face of oppression because to be silent is to cooperate in the injustice and oppression placed upon our fellow human beings. I now know exactly what your thoughts would have been about buffer zone laws, Dr. King. I am glad I asked.

Article written by Barbara J. Hagan. She is a longtime pro-life activist, past president of NHRTL, and former legislator.