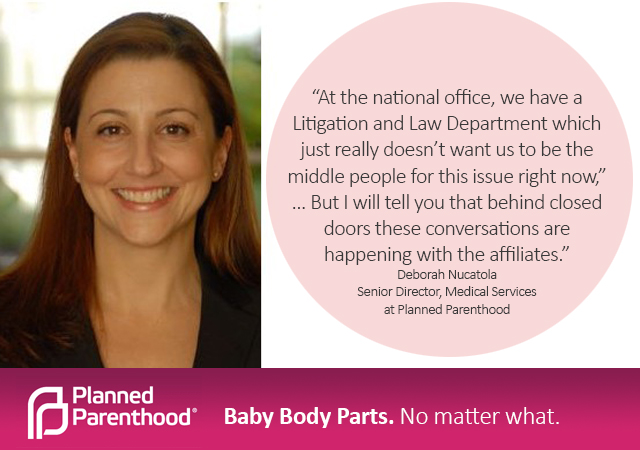 Have you heard the breaking news today?

Planned Parenthood, the nation’s abortion giant, was revealed to participate in the trafficking of baby body parts. Many times they engage in partial birth abortion to ensure the desired organs are extracted without damage. Both are felonies.

We’ve been good at getting heart, lungs, liver, because we know that, so I’m not gonna crush that part. I’m gonna basically crush below. I’m basically gonna crush above, and I’m gonna see if I can get it all intact [..]

“I’d say a lot of people want liver. And for that reason, most providers will do this case under ultrasound guidance, so they’ll know where they’re putting their forceps. The kind of rate-limiting step of the procedure is calvarium. Calvarium – the head – is basically the biggest part.”

Our taxpayer dollars are supporting an organization that not only murder pre-born children, but also sells their body parts. They are profiting off of abortions and the illegal sale of baby body parts.

Are you outraged enough to make your voice heard?

While the response from Planned Parenthood seeks to indict the video rather than answer the obvious concerns of the public, their response is that “tissue donation” is nothing inappropriate. However, this video stands as proof that Planned Parenthood is engaging in the direct selling of body parts and organs of aborted babies. Planned Parenthood must be held to account for this illegal and immoral activity.

It is important to understand there was massive governmental and private business cover up with regard to this horrifying activity. Whether you are discussing governmental (taxpayer-funded) grants or political contributions, it is clear that the flow of public and private funds to this criminal organization must be stopped. Planned Parenthood must be called to task for their directly benefiting from the babies they abort.

This video is proof that Planned Parenthood encourages the direct sale of baby body parts to third parties and there are sufficient legal grounds to consider it a conspiracy.

Engaging in the solicitation of aborted baby body parts is both illegal and immoral. It is past the time for citizens to stand up and say NO to Planned Parenthood. Abortion facilities who benefit from encouraging abortion only to engage in the illegal enterprise of profiting from these killed innocents is unacceptable and illegal.

Any cookies that may not be particularly necessary for the website to function and is used specifically to collect user personal data via analytics, ads, other embedded contents are termed as non-necessary cookies. It is mandatory to procure user consent prior to running these cookies on your website.

The mission of NH Right to Life is to foster respect for human life from the moment of fertilization to natural death and to promote the right to life as the paramount social issue through educational, legislative, political, and other forms of lawful activity. Your financial support helps us carry out our mission in New Hampshire!